A professional musician for many years. (82 – present)

I started music at 12 with a pathetic but funny private teacher. When I was 14, I took on a teacher with long hair and a beard.

I discovered Zappa, Mahavishnu, Gong, Magma, Zao, and many other groups that not only changed my musical culture but introduced another way of thinking. I changed worlds. From the street to the counterculture. Magazines such as Pilote, Charlie, Fluide Glacial, etc. Were my bibles and Best and Rock n Folk my go-to magazines.

After years of private lessons, both in France, Nice, and Montreal. I passed the upper step: joining a music faculty in Canada at Concordia University to do a license under the name: Fine Arts Studies. I graduated easily. I have very fond memories of my university years. Everyone was playing in loads of original music bands. I also benefit from the premises and also from music students to set up my group, a septet interpreting my compositions: Aloes. The group with which I played for 7 consecutive years at the Montreal International Jazz Festival.

I also play bass, mandolin, Ukulele, and instruments of my invention.

Me at school. Would you find me? 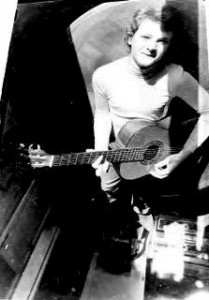 I started music by composing by ear on a piano at my grandmother’s house. I identified myself with the letters of the mark. Every time I came, I continued the song. I was four years old!… I remember that my family was surprised that I remembered the piece, and they thought it was pretty too…

As soon as I started to study the guitar, I composed. I have boxes of handwritten scores and ideas for pieces, often tricky to decipher. Some of my songs come from these archives.

The track I later titled Ragged Edge (in tribute to a rock band I was 18) was the first track I composed. All parts were written, and I played them as is, and I just added a big guitar solo on top because there weren’t any themes.

Listen to Ragged edge. My first composition. I believe I wrote it in 1981. I’m not sure. Excerpt from the 2017 album The Green Monster

Check out my complete catalogue of songs and albums

Even though I studied jazz for a long time (from 1982 to 1990), this music was never really my musical style. I would even say that it was imposed on me and that it took me years to get rid of a way of playing that I didn’t like.

I was doing jazz because in Quebec when we studied music at university, it was either classical or jazz. The first year in college, I was hired to play with the jazz group Quartz in 1982. We played all over Quebec and mainly at the Montreal Jazz Festival. It got me started, and the following year, I founded my group: Aloes, for my second year at university. A group of 7 musicians where I wrote all the compositions and arrangements.

It was an ambitious project, but looking back on today, it was lovely. I had great formations with, in particular, the late Normand Devault on piano, Normand Bock on percussion, Pierre Lafrenaye, trumpet, Jocelyn Maynard on sax, Steven Amirault on piano, Alain Picotte and Kevin De Susa on bass, among others. We even participated in the jazz festival competition at L’air du temps. A super trendy bar at the time closed since 1991.

These university years brought me a lot. I learned harmony and improvisation and how to work on my instrument and play in a group.

The college years have come to an end. The awakening was harsh. No more loans and scholarships. To survive, I played in many small groups for a pittance when we played, and I mostly did many odd jobs outside of music.

My group Aloes was really great, but 7 musicians were way too hard to sell. So, I made a stupid decision and made a quartet version, thinking I’ll find more contracts. 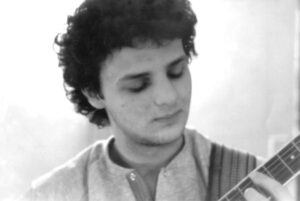 At the time, I did not yet have the necessary level to assume the soloist role. I was a promising composer and arranger but didn’t work the guitar enough. And above all, I was young, 24 years old. Today, and for a long time, I can hold the lead without any problem, but at the time, I was a little light for the role. In addition, I had fabulous horns and pianists in the previous versions of my formations. The contrast was harsh. 😉

Despite everything, I did a few seasons in quartet. The last quartet on my first album consisted of Pierre Bonin: keyboard, Alain Picotte: Bass, and Mario di Blasio, Drums. We had finally found chemistry, and I was starting to shake off the jazz influence from my college days. I was beginning to see my sound. I developed a great musical bond with drummer Mario Di Blasio.

Alongside my career as a band leader, I have played in a large number of groups. Mainly jazz, even jazz fusion. I also accompanied several singers like Barbara Rainey, the late Sophie Lapierre, and the now famous Terez Montcalm.

My style, or rather, my types of music, ranging from folk rock to jazz via metal, African music, Indian music, funk-rock, and metal. I am naturally drawn to odd meters and dissonant harmonies. 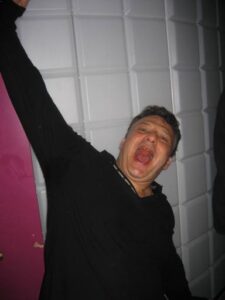 Bad idea! I never got used to the French mentality, and I had become too American to get used to.

To top it off, I went to bury myself in the south of France, where the weather is indeed charming, and the food is delicious, but where there is absolutely nothing to do from September to June.

I started Aloes again with “Petit” Louis Martinez: guitar, Sega Seck: Drums, Daniel Ragot: Bass, and Franck Nicolas: trumpet. After an up-and-coming season with many concerts, we broke up at the end of the season, and our musical worlds were too different.

I played my music again under my name. Hervé Senni Trio with Stephane Cédât on drums and Jean-Philippe Caseneuve on bass and in septet version with a lot of freelancers and the same basic trio formula. We played at some important places like The Jam in Montpelier and at the “festival de jazz de Millau.” The lack of places to play such music and the french crowd not being into jazz fusion made it difficult to play regularly. There is simply no scene for jazz fusion in the south of France. 2 or 3 clubs per city, and who prefers programming classic jazz bands.

The French public is very different from the North American public. The jazz audience is old school. Very jazz standards. After 3 or 4 years of trying to move mountains to only play irregularly. I stopped my career as a band leader.

I followed the opportunities that presented themselves.

I played for two years with the dance group La Malaïgue d’Or. In addition to being friendly shakers, this group had the particularity of having a band formula on stage and a Banda’s formula in the street. The bassist was playing the bass drum, the drummer on the snare drum, and the pianist on tenor sax. The rest of the horns are on their usual instruments.

Because I was one of the few Tuba players able to catch songs live by ear, I played with tons of bandas.

I made callsigns and jingles for local radio stations like RPH in Montagnac and a religious radio in Montpellier.

In 2000, I became guitarist, tubist, arranger, and conductor of the dance group K’danse for a season.

From 2001 to 2012, I was forced to stop playing the guitar because of recurring tendonitis that dated back to my student years at Concordia University. I couldn’t play at all. I’ve been hanging out for 20 years now.

In 2004 I stopped the tuba. Amount the dozens of groups I played with, sometimes I never knew the group’s name. I played for 2 years with Allegria Brass Band from Beziers and Cannelle from Toulouse.

I improved my technique on the tuba but never had a good sound. I loved playing it, but I love having stopped. I loved playing in the horn ensemble and being just one note of the chord. Having to balance with each other in terms of tuning and expression. I learned a lot from that experience.

Because of the tuba, I got more melodic on the guitar. Before, I was strong on technics and playing fast and complex rhythms. Now I want my solo to sound as clear as a melody… They call it getting old.

I was intrigued by the look and had never played on a resonator. In addition, I liked the mixture of a vintage look with today’s technology.

I was hoping it would make me want to start over, and I didn’t like the gear I had at the time. 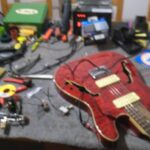 From the first notes, I went back to music full time. I immediately set up my home studio. The Secret Room Studio because of the smallness of the room. Quickly, by dint of ordering gear from Thomann, I started making guitars and developing electronic modifications in particular.

Since 2014, I’ve built over a hundred guitars and crafted countless custom pickguards that I’ve sold online. 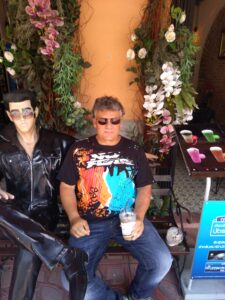 I had been fed up with living in France for a while. The region where I was (Agde) is a cultural desert, and I had neither contact nor the desire to make yet another effort to change the area in France.

I had been thinking about Thailand for years, and I even ordered a backpacker’s guide in 2014 for a trip that never happened.

After a month-long trip in May 2019, I decided to establish myself there. I realized that time was flying by and that I got to move up before it was too late. My friend and immense pianist Normand Devault had just died, which was the trigger. I sold my duplex and another apartment I had, and let’s go.

But what drove it all was my desire to leave France. I wanted to live in a different society. I have already known the delights of expatriation, as for 17 years, we went to settle in Quebec. The early years were magical, and everything was new. Afterward, it becomes habits, and routine erases the marvelous.

For almost 3 years that I have been here, I have managed to refurbish my home studio. This is by far the best home studio I’ve ever had. I am also working on the complete installation of my guitar manufacturing workshop. It drags a lot, even if I have progressed a lot since this article.

I continue to produce my music and distribute it on streaming platforms. I have produced 3 albums and a few singles since my arrival.

Up to now, I couldn’t find musicians to play with. The music scene in Chiang Mai doesn’t exist. In Bangkok, there are gigs, but Covid messed things up, and now only the established players have work. The Jazz scene is really conventional. I hope things change now that covid is over. 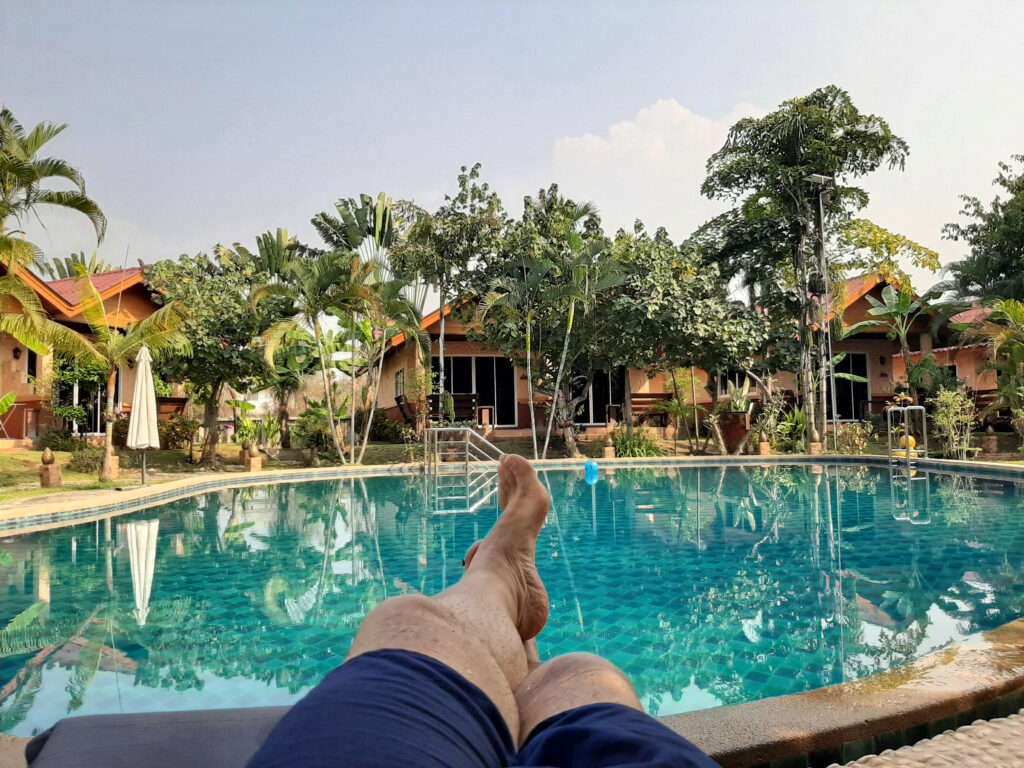